Over the last couple of months of the Building Task Force has been quietly working behind the scenes to prepare for the combined campaign that launched on September 23. (Take a look at the capital and operating campaign brochures!)

We have also been working with the architect to identify and create sub-teams tasked with some key areas of the renovation project, namely the kitchen remodel, the roof repairs, and the audio visual/lighting improvements. These sub-teams were drawn from key users or those with special skills relating to these areas. We are also leveraging the experience gained through the design of the sanctuary. The input and ideas we’ve received are already resulting in creative options and recommendations.

Over the next month the Task Force will be focused on contributing to the success of the combined campaign. Bi-weekly meetings will resume in November. The goal is to have a design for the renovation completed by the end of the year in preparation for soliciting bids in the early spring. We expect to be ready to begin construction in April with completion in November 2019.

We are all depending on YOU, the friends and members of First Unitarian, to help us raise the $1.4 million needed. Please be generous in your pledge to the combined campaign!

Since our congregational meeting on June 3, the Social Hall Task Force has continued to plan and prepare for the launch of the renovation project later this year. Working with architect Doug Heller, we have identified a small number of sub-committees that will focus on specific issues, researching and analyzing different aspects of the redesign of the kitchen, acoustics, and lighting. This will ensure that decisions support the needs of the congregation—increasing usability while maintaining flexibility. These subcommittees’ efforts are critical input to refining the final design for this project.

At the same time, the Task Force is proceeding with a technical evaluation of the roof so that we can solicit bids for critical repairs. Work will begin over the next few months.

At the Special Congregational Meeting on June 3, the congregation voted to proceed with a $1.4 million capital campaign for the renovation of First Unitarian’s Social Hall and associated projects– including new meeting rooms, a new kitchen, new bathrooms with showers, new windows, doors to the wildlife habitat, and better acoustics. In the meantime, multiple improvements have been made to the La Amikoj/Wesson/Arnold Wing. 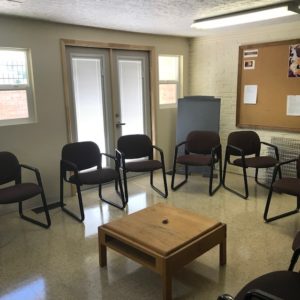 New double doors offer ADA access from the La Amikoj Room to the grass field and a new patio. 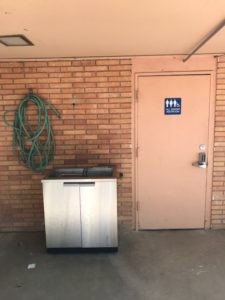 A new security-coded, gender neutral bathroom can be accessed without interrupting meetings in the Arnold Room.

The Social Hall Renovation Team held eight congregation-wide listening sessions in April (April 10, 16, 23 and 30), as well as sessions that focused on capturing specific details relating to key users and stakeholders of the Social Hall.  On May 18, church members were notified of a Congregational Meeting to be held on Sunday, June 3. The meeting notice included a copy of the current working design, which considered input gathered during the listening sessions, including:

These design elements, along with a potential schedule and cost estimate, have been displayed on the portable wall in the Social Hall.

June 3
Congregational Meeting to vote to approve proceeding with the Social Hall project.

October-November
Conduct Operating and Capital campaign to raise both operating and capital funds.

Annual Congregational Meeting to approve operating and capital budgets, as well as construction loan to begin the Social Hall project.

Fall, 2019
Move in to beautiful Social Hall and CELEBRATE!

The January 28 Annual Meeting  included a lively discussion about a proposed building project to commemorate Christine Robinson’s long ministry at First Unitarian, and we were listening carefully. *

In the meeting, the congregation wanted to separate the commemoration from the possible Social Hall renovation.They approved proceeding with exploring a design for renovation of the Social Hall. The Board of Directors decided (link to minutes) to engage the congregation in additional discernment to select a commemoration project(s). We announced these plans in a special insert in the Order of Service.

In January and February of 2018 the Social Hall Renovation Task Force (TF) met several times to discuss the goals for a possible renovation of the Social Hall. We quickly agreed the primary goal was to improve the usability and functionality of the space to the south of the Sanctuary Foyer including the kitchen, library, social hall, storage space and bathrooms. We believe the continued growth and vitality of our congregation requires that we provide more meeting/activity space to support the mission of First Unitarian. Over the last few years we’ve seen a significant increase in the number of interest groups, classes and community outreach initiatives formed within the congregation.  The demand for meeting rooms now exceeds the capacity of the current configuration of our campus.

In addition to looking for ways to increase the number and flexibility of meeting spaces, we also discussed the immediate need to address a number of structural issues relating to this space.  These included roof repairs, heating/cooling improvements, lighting and electrical upgrades and a desperate need to improve the acoustics of the main space.

In early March the TF met with Doug Heller of Mullen-Heller and Associates, the architect who designed our beautiful sanctuary. During these meetings the TF shared with Doug the feedback we received from the congregation in December 2017 relating to a possible renovation of the Social Hall area.  Doug used this input to create a preliminary(Rev 0) floor plan that incorporated changes that reflected the growing needs of the congregation.

On March 18 and 25 we conducted a total of 4 info sessions after Sunday services—nearly 100 congregants participated. The result was that we received a wide variety of suggestions and feedback covering all aspects of the renovation project under consideration. We captured all these ideas/suggestions in a master list and reviewed each with Doug Heller, architect. The most frequently mentioned concerns related to adding (and number of) showers, improving acoustics, creating or reclaiming more meeting space, removing the old stage and wall and renovating the kitchen.  Doug has now taken these ideas and has revised the initial proposed floor plan.  We’re excited for the congregation to see how their ideas are reflected in the new proposal.  Trying to support and promote the mission of a diverse and growing congregation isn’t easy—especially on a budget—but having the enthusiastic interest and input of the congregation is critical.

The Task Force will continue to engage the congregation during the month of April in a number of ‘listening’ sessions (April 10, 16, 23 and 30).  Some sessions will be focused on capturing specific details relating to key users and stakeholders of the Social Hall.  Other sessions will be open to any member of the congregation.  If you are interested in attending one of these sessions, please contact Donna Collins at collinsmctaggart@gmail.com.

Also look for a table in the Social Hall following Sunday services on April 15, 22, 29.  We’ll have a copy of the revised floor plan and be available to answer questions and collect your feedback and ideas.

*The La Amikoj-Wesson-Arnold wing also came up at the annual meeting. We are in the process of acquiring new seating for La Amikoj and Arnold, and will use gifts made to the 2017 year-end appeal to purchase rugs, wall décor, and materials to improve the acoustics of Wesson and Arnold. A bathroom remodel is planned for the spring, which will provide an updated bathroom with improved access—without having to awkwardly pass through Arnold. And you may have noticed the wing already has new floors and paint. 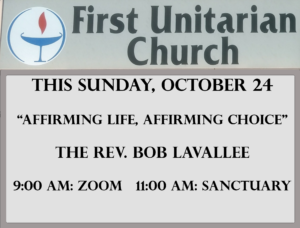